We just finished up a fantastic visit to San Antonio, Texas. We were very impressed with this city when we attended the NCAA Final Four last spring and were more than happy to return. San Antonio is a very large city with a small city vibe, so you don’t feel overwhelmed. The atmosphere is casual and the city governance is constantly working on infrastructure, housing and tourism. They have been working on an addition to the famous Riverwalk, opening up an unsightly creek, adding waterfalls, art installations and sidewalks. They also have a new filtration and cleaning system for Riverwalk so that they don’t need to drain and clean it every January like they used to. Also around the city they have installed a new interactive “way system” with touch screens that allow you to search for directions to your walking destination. Frost Bank is working hard to complete the newest building to redefine the San Antonio skyline and apartments are being built. With winter temperatures in the dry 60’s to 70’s, what’s not to love about this city? 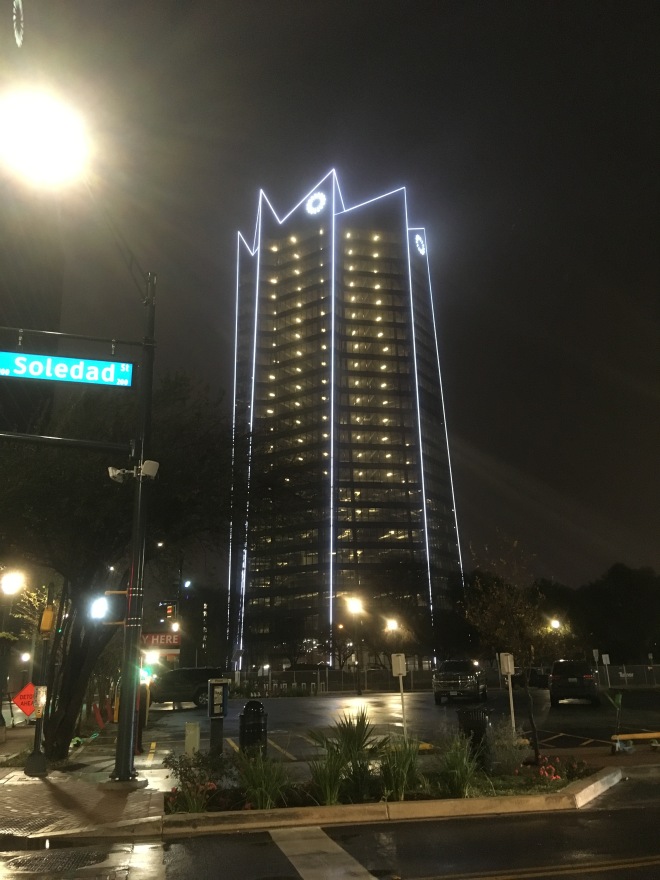 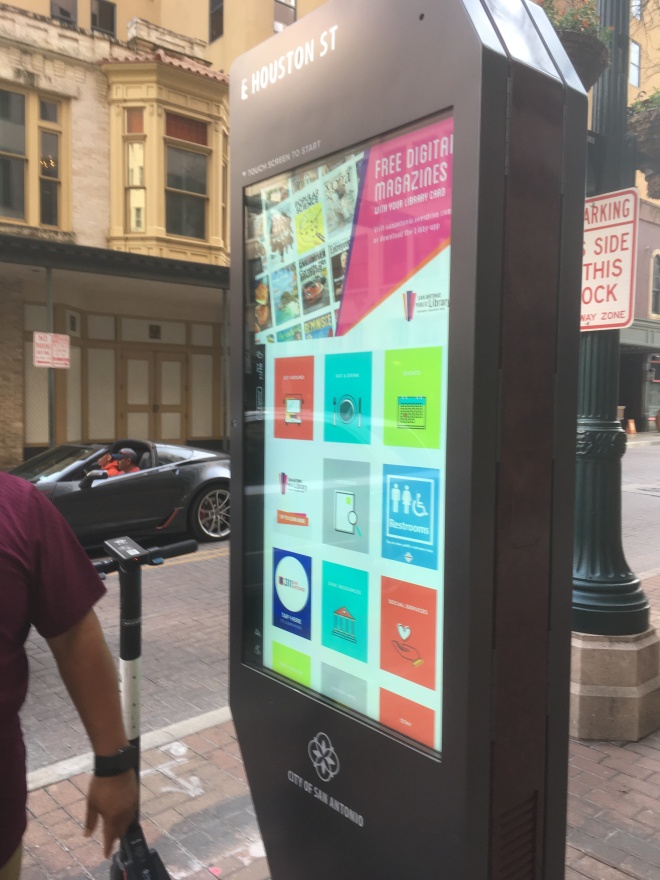 We were also happy to see our friend Lorenzo again! Lorenzo and Louise used to work together at Aetna. He is the executive assistant to the President of USAA and invited us for a tour of the USAA headquarters campus. Wow, what a place that is! Not only a huge state-of-the-art building, but every amenity for employees that you could imagine, and surely many that you would not imagine! Outside, there are softball and soccer fields, tennis and pickleball courts and miles of jogging paths. There are also locker room buildings with showers near these facilities so that employees who play intramural games after work can shower before heading home if they want. There are pavilions with outdoor kitchens and tables where they hold outdoor meetings and special events and a stocked fishing pond in case you want a to go fishing on your lunch break. Inside, there are three fitness centers with lockers and laundry service that are free for employees, a wellness center where you can see a doctor, a CVS pharmacy to fill your prescriptions, four cafeterias with food courts (Subway, Wendy’s, Starbucks, Chick Fil-A as well as popular local restaurants), balconies with tables and chairs for outdoor meetings or to eat lunch. They also have an area called “Energize,” which has pool tables, ping pong, foosball, etc., and another area called “Relax,” which has tiny rooms where you can go to have some quiet and read while you eat lunch or make private phone calls, and even nap rooms! USAA believes an employee who exercises his body AND brain, eats well and gets enough rest is going to be a healthier employee and, therefore, a happier one. 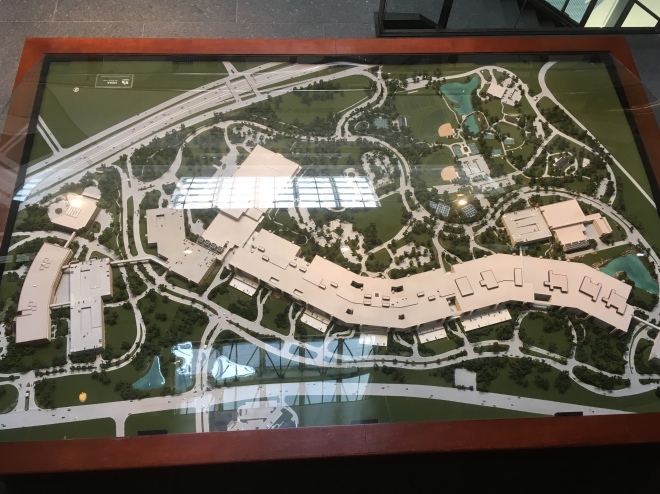 Overhead view of a model of the USAA campus. 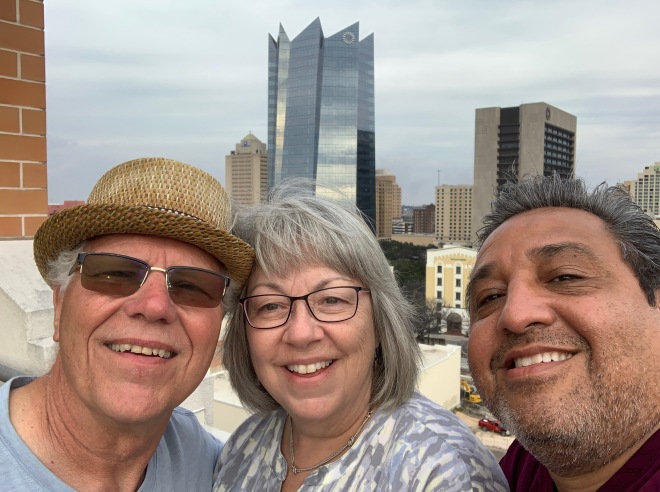 We joined Lorenzo for a walk around the city, lunch at a new bistro and then a drive to the northern part of town which has beautiful “old money” homes and beautiful parks. It’s so great to have a local tour guide because you get to see areas that most tourists don’t. 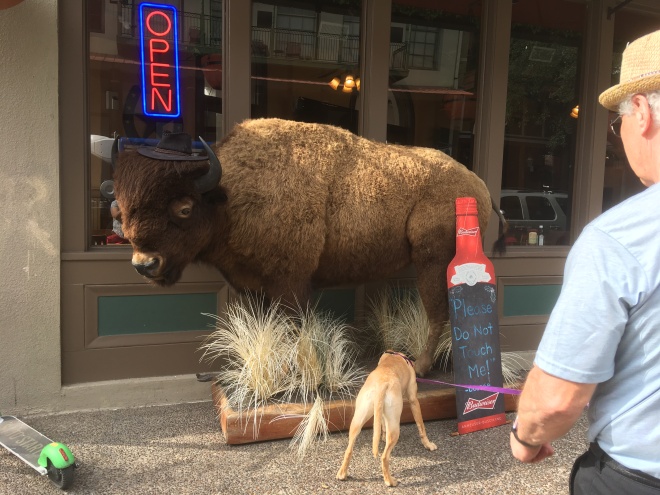 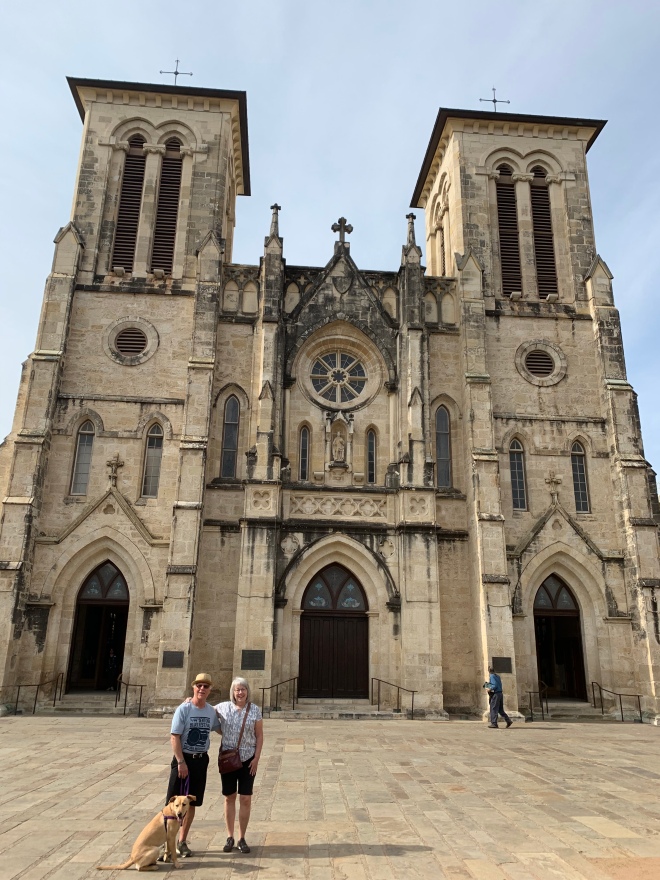 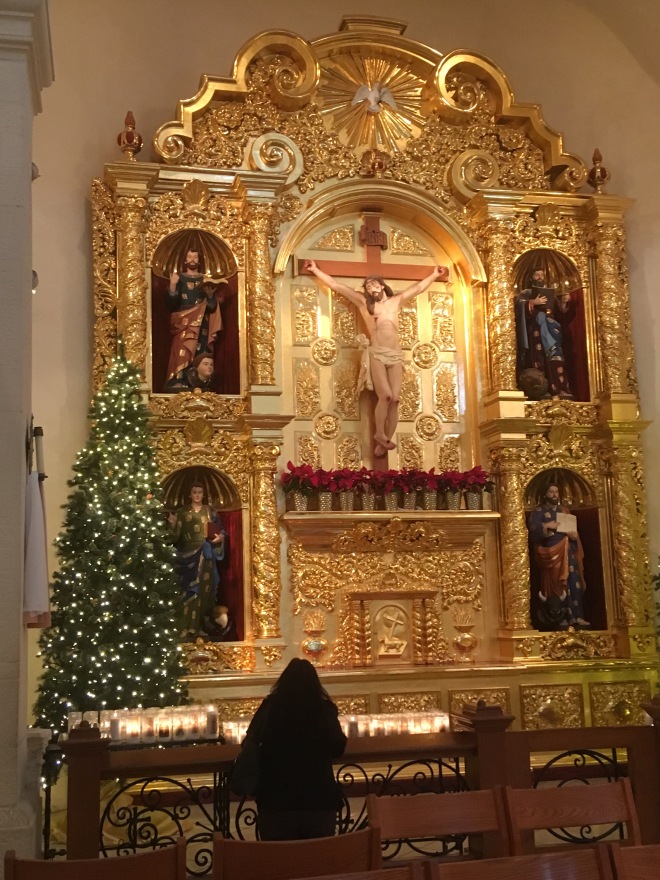 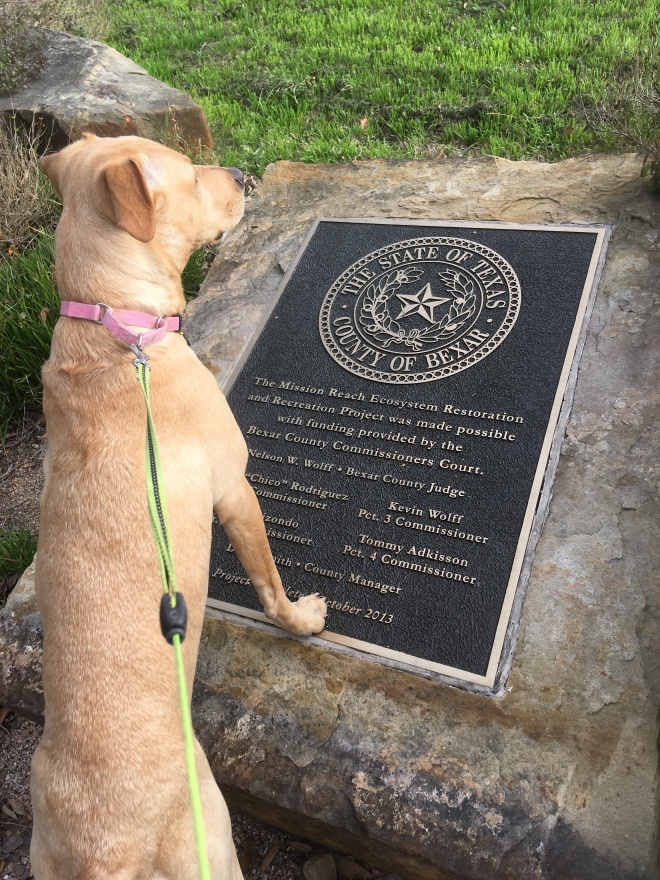 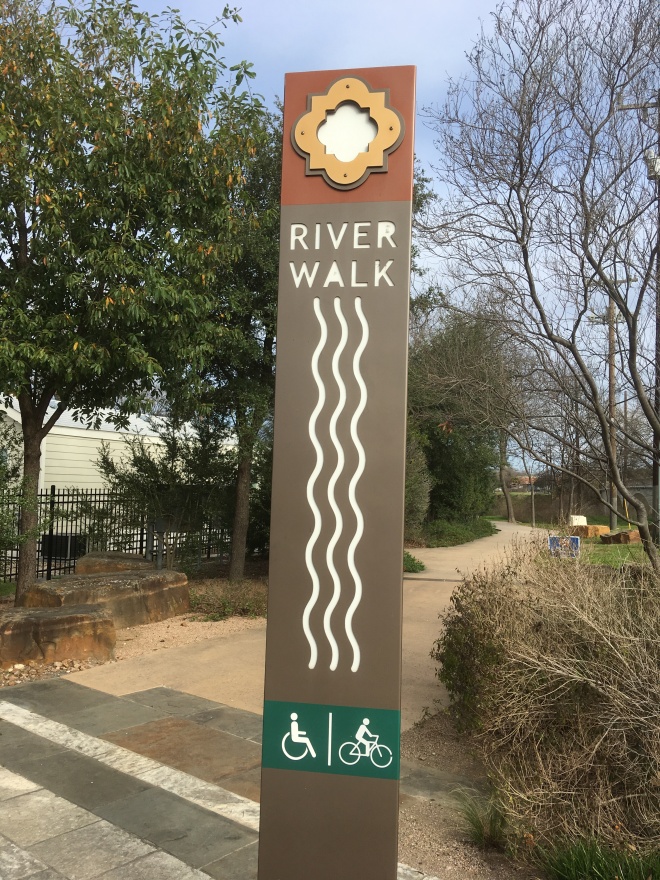 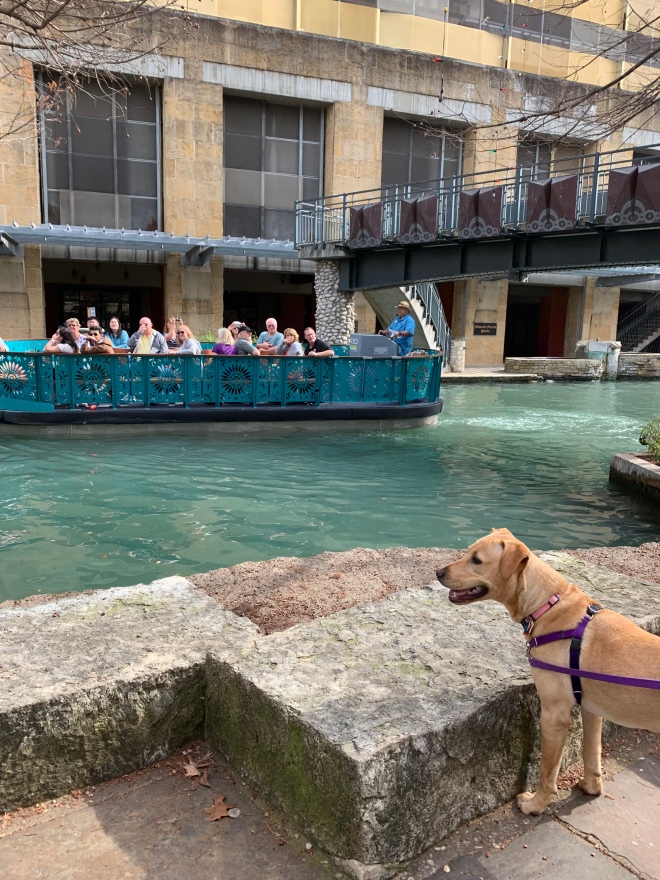 Everyplace we stop, we find a dog park where Tessa can run free without a leash and hopefully get to play with other dogs. We found a great one in San Antonio, of course. Not only was it clean and spacious with fresh drinking water and a rinse station, but it also had an agility course set up. Tessa quickly learned to leap over the jumps, run through the tunnel and climb the ramps (anything for treats). The dog park is located just a half mile or so from Lackland Air Force Base’s airfield, and we had the pleasure of watching gigantic C-5 cargo planes take off every few minutes, bank and fly directly over the park. Those cargo planes are massive! It was a treat to watch them. 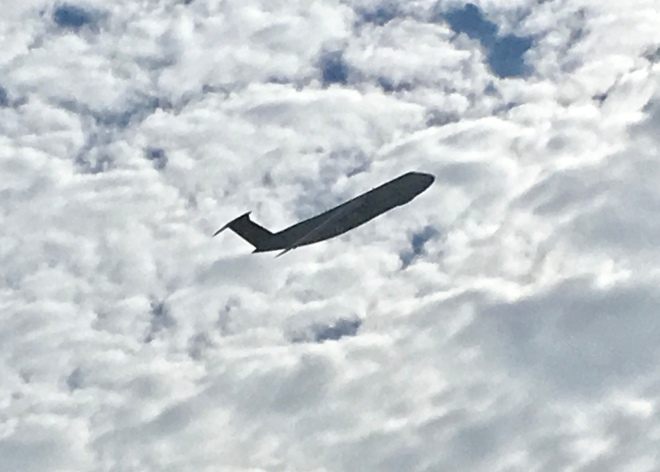 One night, we went to an NCAA basketball game to see the University of Texas at San Antonio take on Rice University from Houston. Coming from UConn country, it was interesting to see the small college gymnasium with about 1/3 of the seats filled. Still, Texans love their college sports and we had a fun time. UTSA won by a healthy margin. 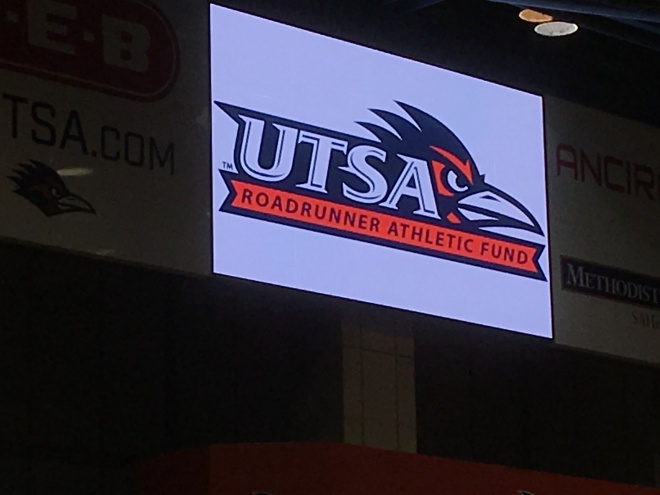 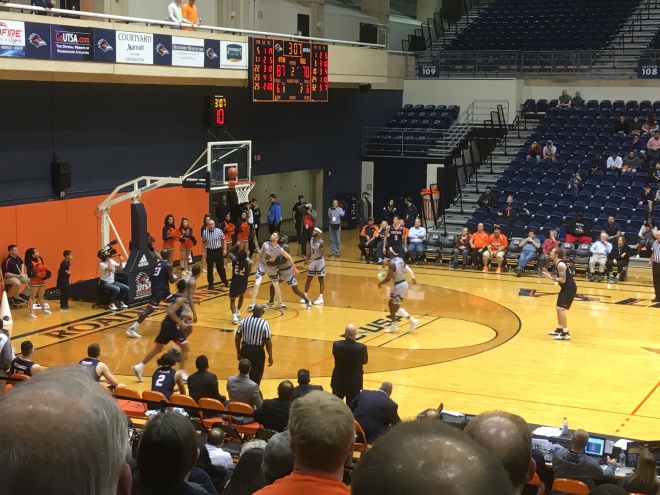 The icing on the stop in San Antonio was when Lorenzo invited us to see the Broadway show “Waitress” at the beautiful Majestic Theater. He told us the Majestic was a beautiful theater, but we were not prepared for the absolute exquisiteness of the place! Every surface seems to be decorated, from the walls to beautiful ceilings in the foyer. But when we walked into the theater itself … WOW! What a stunning building! Rich blue ceiling with stars twinkling above, and a Spanish city facade lining the walls. The beauty of the theater alone was worth the price of admission! (The show was excellent, too, we highly recommend it.)

We started with dinner at Bella restaurant, which was delicious, and ended the evening by stumbling across a guitar and vocal duo playing at a small bar with outdoor patio. They were fabulous! 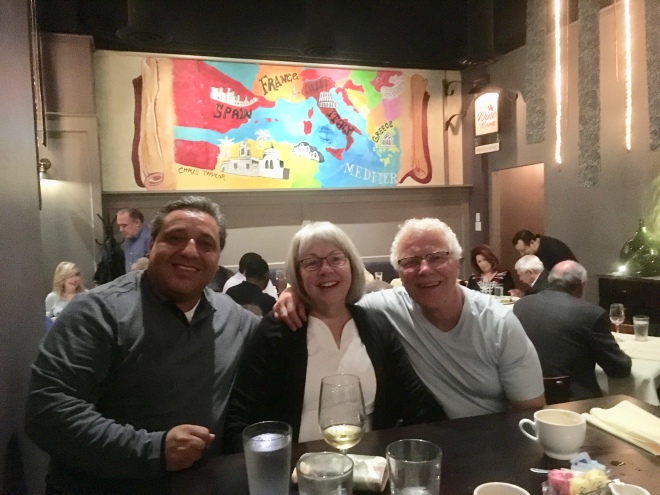 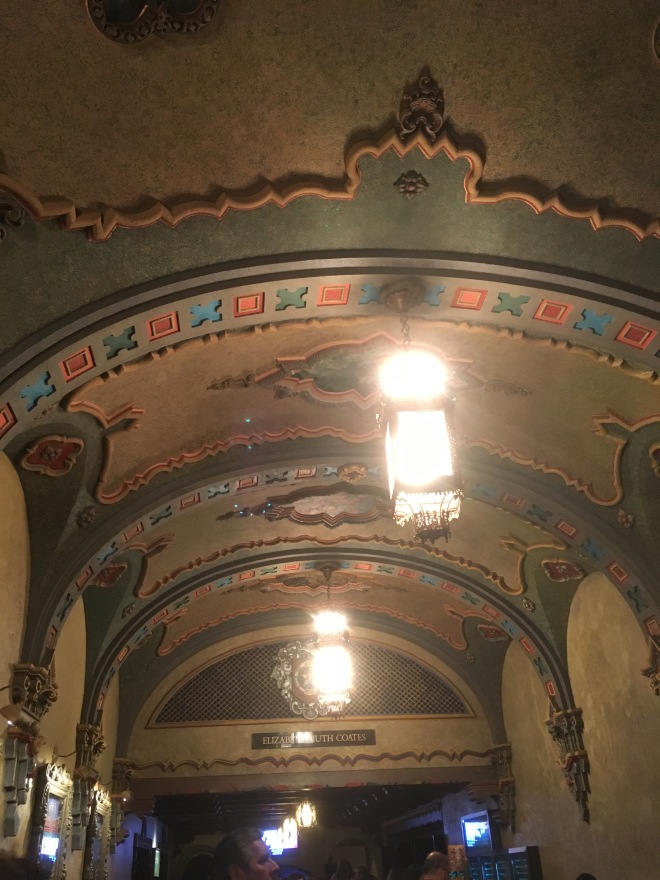 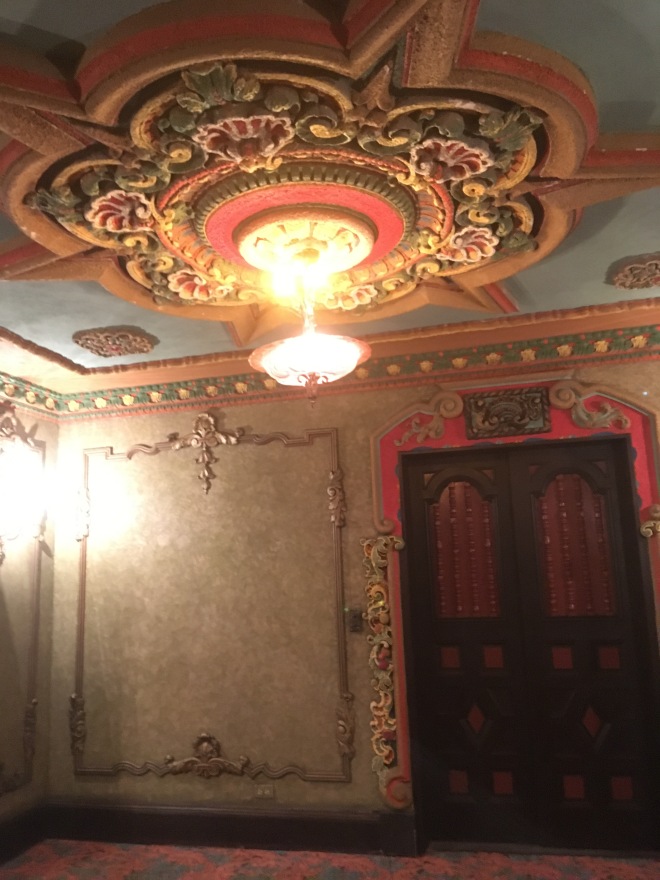 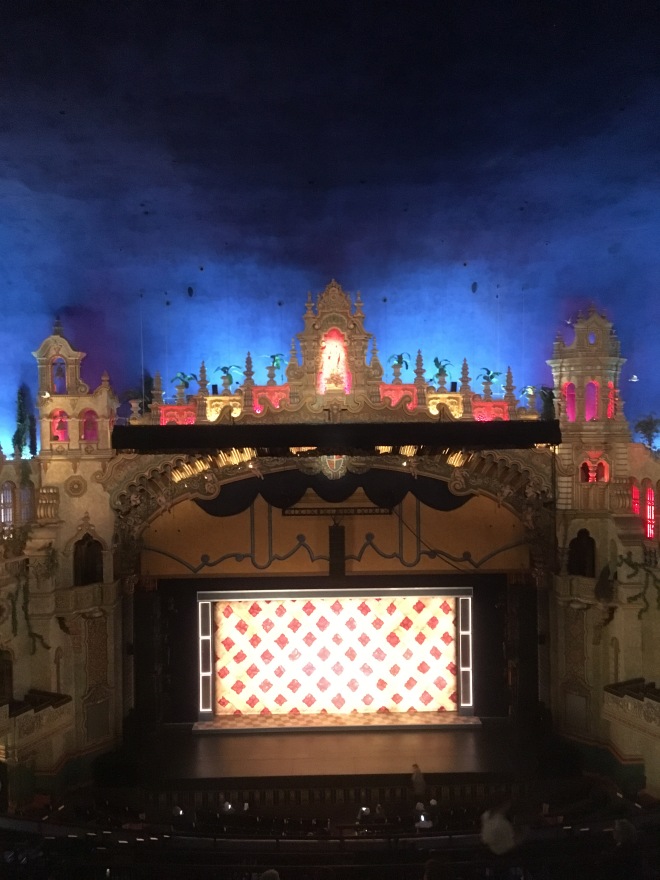 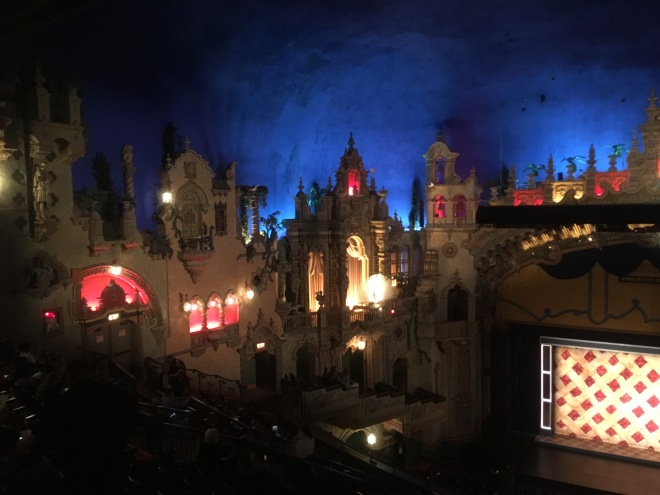 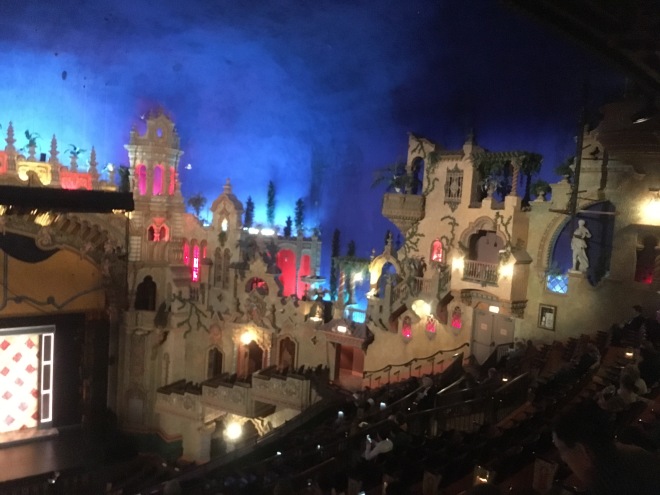 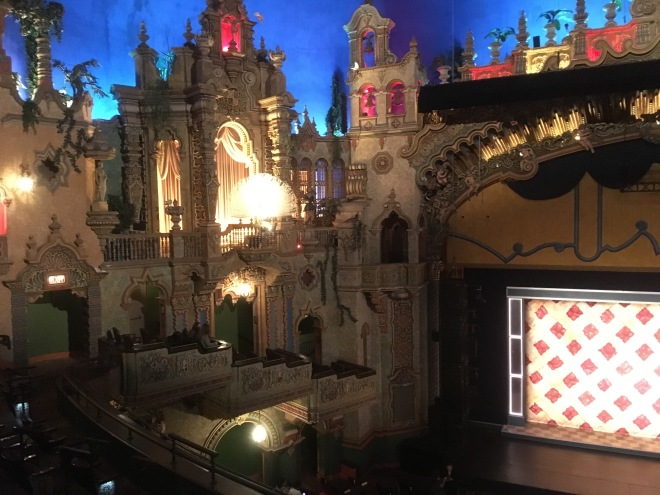 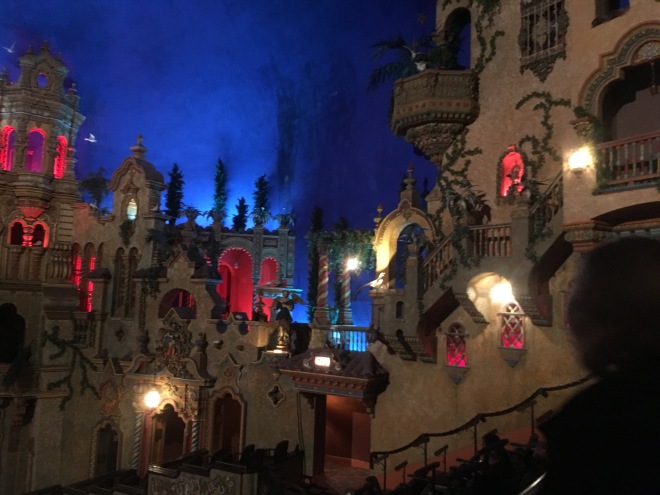 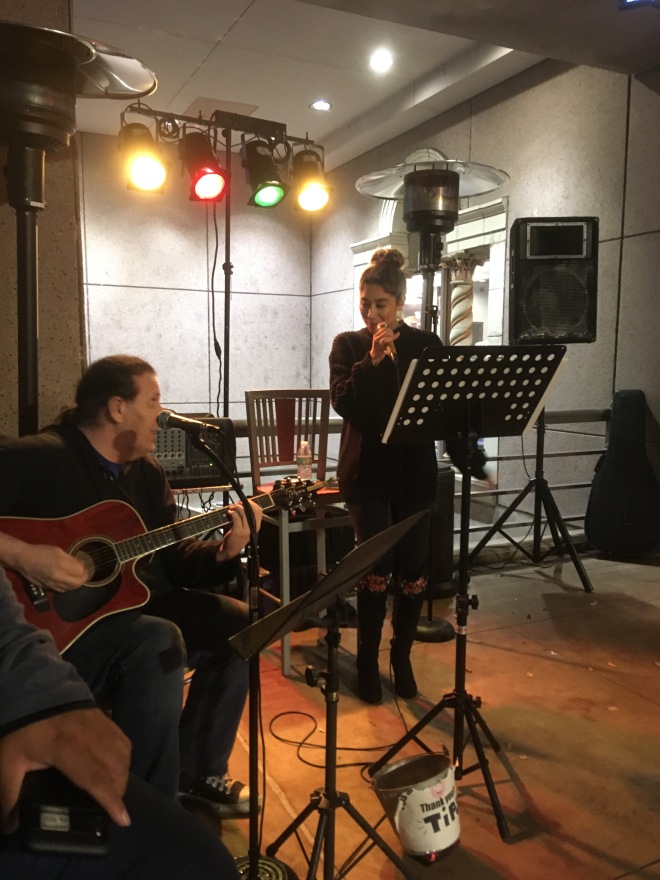 We are now headed for Austin, one of the music centers of the US. We’ll be back in a few days to report on Austin and it’s music scene. 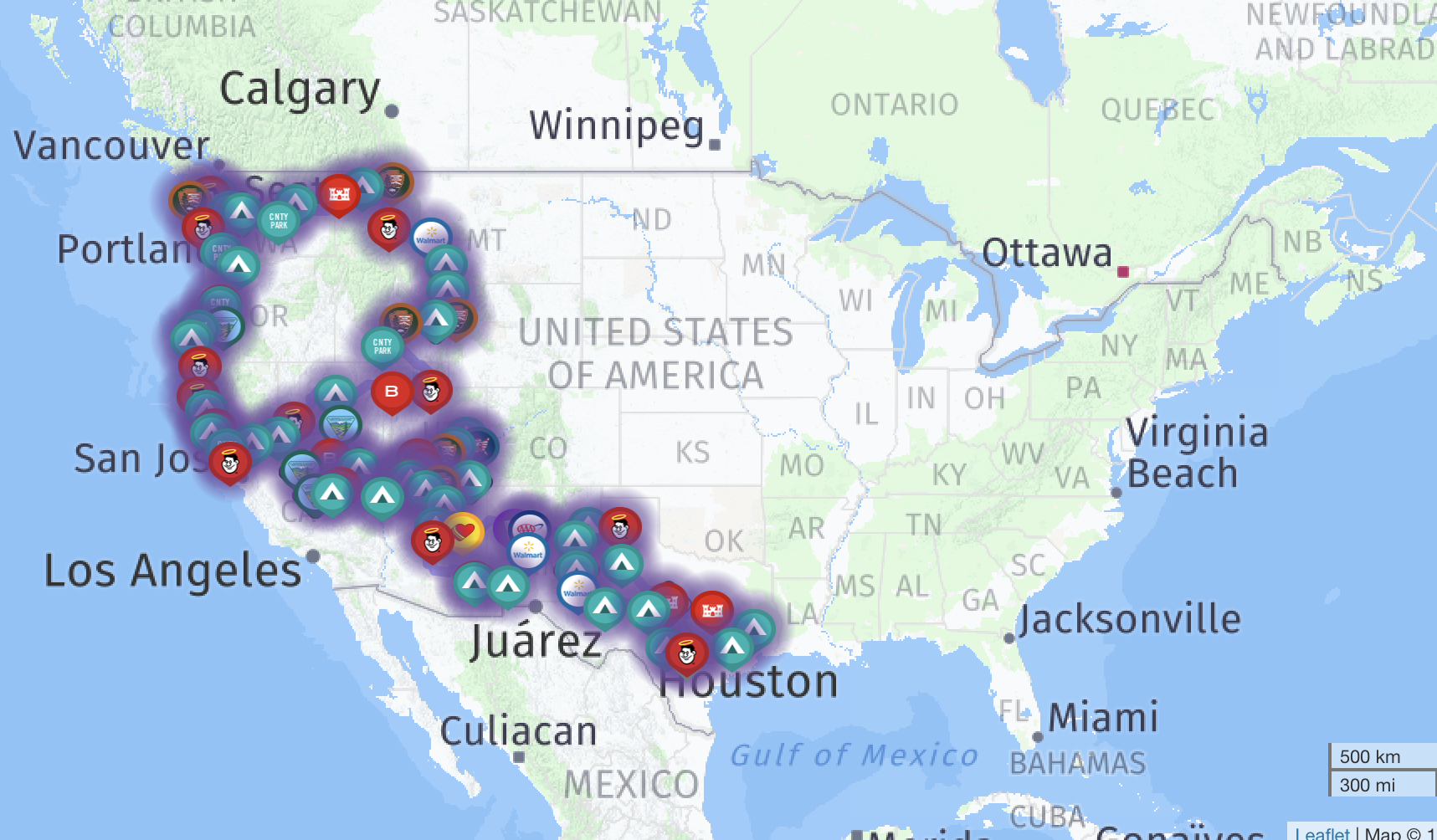 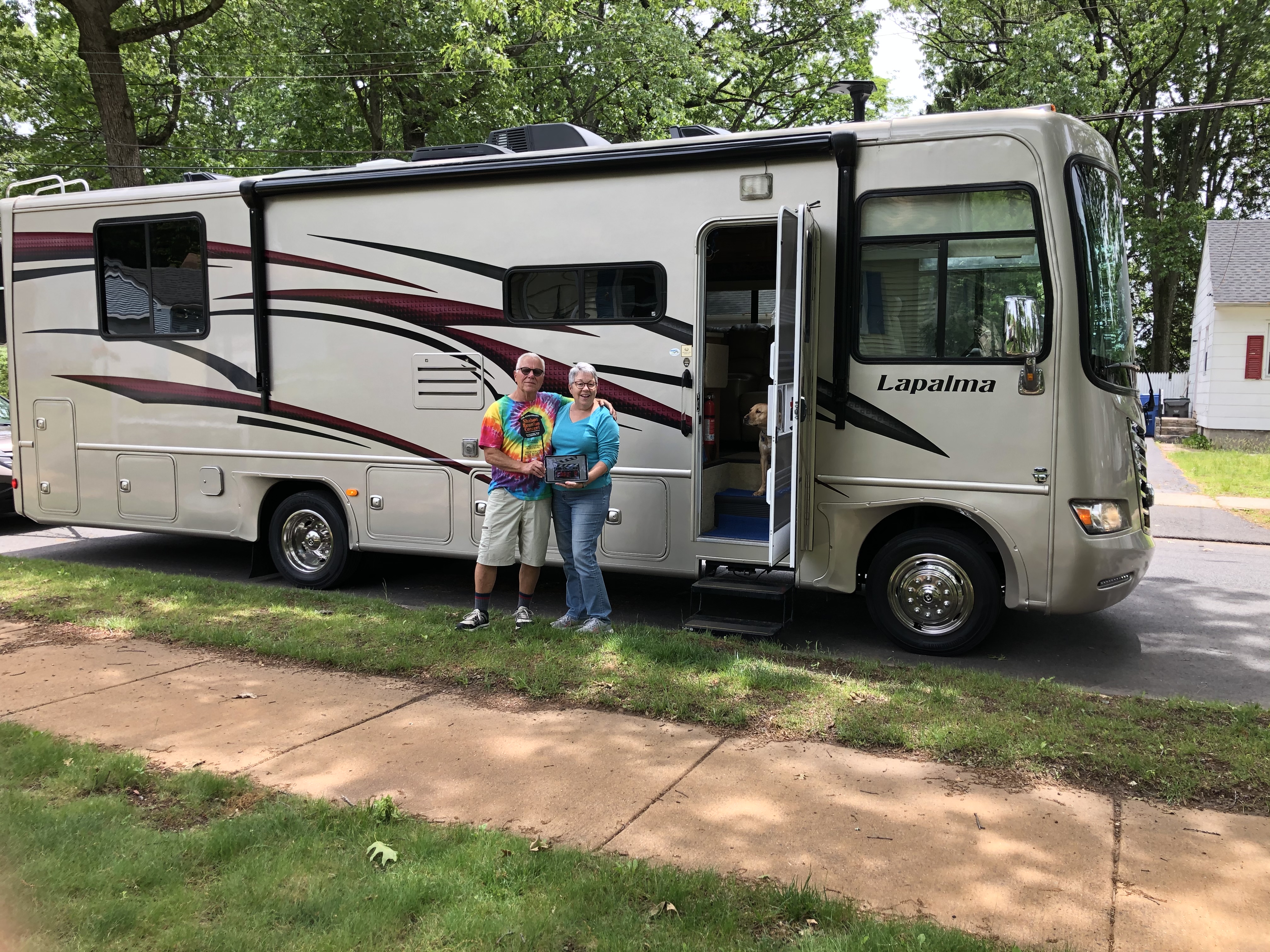