We are driving along I-10 in west Texas and are finally starting to see the landscapes that remind us of the TV shows of our youth: Gunsmoke, Bonanza, Laredo.  It’s true about west Texas being a whole lot of nothing. We have passed exit ramps that don’t even show up on our GPS. The highway is filled with tractor trailers, cattle cars, RV’s and pickups, but Bob pointed out this morning that we don’t see any cars. Shortly thereafter, a Smart Car went by, and we had to laugh — talk about extremes!

We’ve seen tractor trailers hauling wind turbine blades, and that is a real sight! You don’t realize how big they are until you see them at ground level. We pulled off the highway for gas and found three trucks with blades sitting on the side of the road.

It’s no wonder we are seeing blades. We started seeing wind turbines on the tops of the plateaus and they continued for miles and miles. A quick Google search turned up information on wind farms in west Texas. It’s big business out here. Not only does it provide electricity to the state, but these farms have also helped the local economy. This is from a Wikipedia article: “In addition to its large size, the [wind] farm is also notable for the large number of individual land owners (as many as 400) who share in royalties from the project. Wind farms are helping to revive the local economy in remote areas of West Texas and the Texas Panhandle.” There are places where you see natural gas wells, oil pump jacks and wind turbines all in the same place.

West Texas is also the only place I’ve been to where, if a deer is struck and killed on the highway, they just leave it there to rot on the side of the road. You might say it provides food for the buzzards, but we haven’t seen any buzzards. As a matter of fact, there are more vultures in Manchester, CT, than there are in west Texas! I don’t see a single vulture in this enormous open sky!

Heading south from Fort Stockton, TX, toward Big Bend National Park, we felt like this may be where the final scenes of Tom Hanks’ “Castaway” were filmed, where he drives to flat, flat, desolate west Texas to deliver the package that he kept on the island all those years. The flatness just drones on and on! Then we passed a sign warning that flooding may occur, followed by a flood gauge. The flatness is so vast, we cannot wrap our heads around 5’ of water accumulating, no matter how hard parched the ground is. But, I guess it happens!

And on we drive. 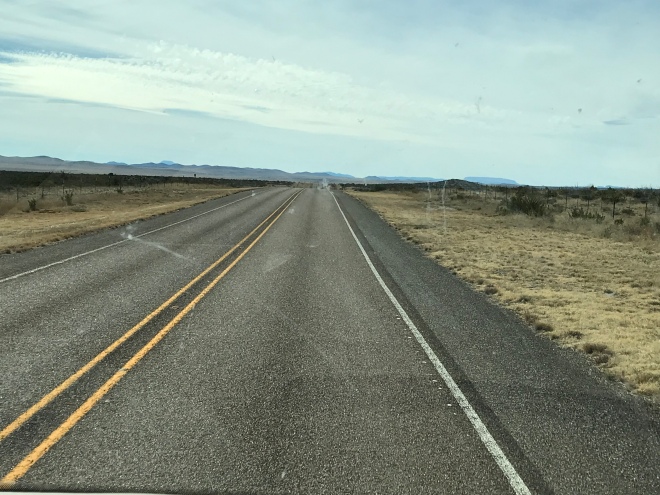 2 thoughts on “On the Road Again”