We’re finishing up a week at O’Neill Regional Park in Trabuco Canyon, California, which is just east of Newport Beach. If you look at a map, you’ll see the towns of Lake Forest, Mission Viejo and Rancho Santa Margarita in the foothills of the Cleveland National Forest, that’s where we are. These three towns are planned communities that were built by urban developers to provide more housing to suburban Los Angeles, the oldest being Lake Forest, which was incorporated in the 1980’s, and the youngest being Rancho Santa Margarita in 2000. The towns are mostly comprised of gated communities with beautiful tree and flower-lined entrances with centrally located shopping centers. There is nothing here that looks old. Or inexpensive!

We’ve mostly been hanging around the area between Irvine and our campground as Louise’s friend Janet lives nearby. Janet lives in an awesome 55+ planned community called Laguna Woods (formerly Leisure World). It’s similar to The Villages in Florida, although smaller in scope. A variety of single-family and apartment homes, all gated and secure with activities, amenities and beautiful grounds. We drove Route 1, the coastal highway, from Laguna Beach north to Huntington Beach and noted that in our week here, we haven’t seen a single poor neighborhood. The number of expensive cars, including Mazarati,  vintage de Tomaso Pantera and Porche and Tesla models that we don’t see back east, cause us to think that there is way too much wealth concentrated in this part of the country!

There’s also a lot of hybrid and electric cars in California! With gas prices starting around $3.49 a gallon and going up to $4.00, I guess I’d have one, too!

It’s been great visiting Janet. Bob had the pleasure of watching a couple of NCAA Elite Eight games on her TV while Louise and Janet went fabric shopping and made pizza. It’s great to catch up with friends whom you haven’t seen in a few years! We also drove up to Redondo Beach to visit one of Bob’s old friends, Midge Romei and her husband, Bob. It was great to see them after so many years!

We also had dinner at a local steakhouse that is hidden in a little community in Trabuco Canyon. The property is very casual, and they enforce this by cutting of tie of anyone who has the audacity to wear one to dinner. The result is walls and ceiling completely covered with ties. 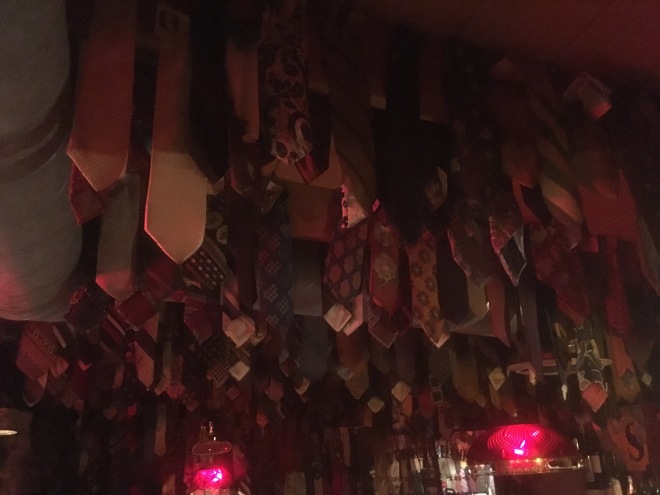 Ties hanging from the ceiling at Trabuco Oaks Steakhouse. 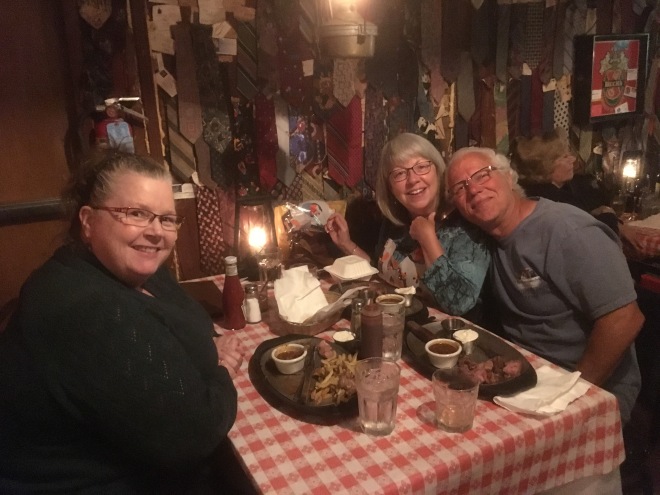 We can’t seem to visit an area without some sort of “story” to remember. This one involves Tessa and some play time at Huntington Dog Beach. Everything was going SO WELL, Tessa had been playing with some very compatible pups and also coming when we called her, happily playing with her frisbee and wrestling with another pups about the same age at the edge of the surf … 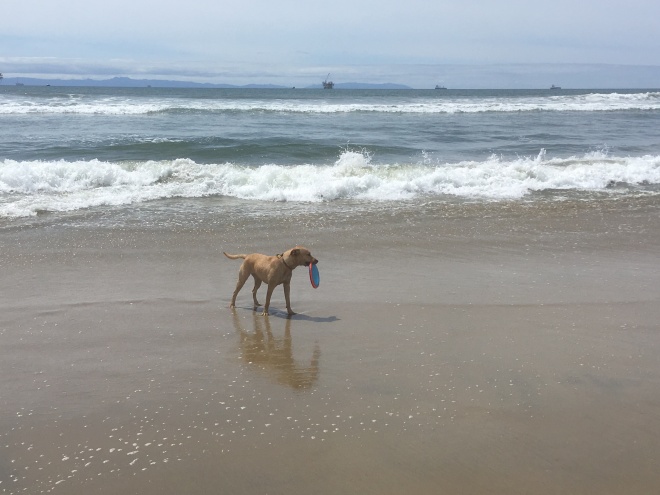 … when she suddenly yelped. She couldn’t put her foot down; she tried, she cried and yelped and held her left paw in the air, unable to put weight on it. Bob took one look at the way her paw was dangling and said, “It’s broken, I can tell.” We made a quick decision that Louise would get the car, drive it around to the  side of the road, Bob would carry her over to the car and we’d get her to a vet. Louise reached into her pocket … where is the key? THE CAR KEY WAS GONE! The key had been in her front jeans pocket, she remembered feeling the top of the key peeking out as she stood on the beach, and she shoved it down into the pocket farther! How could the key NOT be there?! Louise scoured the beach twice looking for the key while Bob carried Tessa all the way back to the car. No key. We were going to have to beg a stranger to take Bob and Tessa to a vet while Louise will have to call Janet or an Uber to take her 40 minutes back to the campground to get her spare set of keys, 40 minutes back to the beach to get the car, and then find Bob and Tessa wherever they end up. Meanwhile, Louise was just distraught thinking of Tessa in agony with a broken leg and Bob carrying 50 lbs of dead weight wet dog a half mile or so. Just as Louise was giving up and about to start asking strangers for a ride, she heard someone say, “Ma’am … did you lose a key?” An angel in a white bathing suit (no lie, a white bathing suit like a beach angel) found my key and returned it to me! We were able to get Tessa to a vet!!!  We could NOT believe it!

We located an emergency vet and Bob carried Tessa in and up to the counter, Tessa in his arms holding her paw loosely. When the people at the counter said hello, Tessa started wagging her tail, so happy that people said hello to her … typical! They took her into the back to examine her, and after about a half hour, a technician came around the corner with Tessa on a leash, and Tessa was walking along as if nothing had happened! No limping, certainly not holding her paw in the air. The technician said the doctor had examined her and found no breaks or serious sprains in any part of either of her front legs. Perhaps she had injured a toe, but when the doctor examined her toys, she yelped like crazy no matter which toe he touched. The technician said, “She’s quite the drama queen.”  What?! No broken bone?!  We hung around for a bit, the vet came to talk to us and reiterated what the technician said, three times he examined her legs and found nothing, but she was very dramatic about having her toes touched, so he wasn’t able to determine if a toe was sprained, and he wasn’t going to put her through sedation and shaving to X-ray her toes when she seemed to be walking fine. He suggested we give her anti-inflammatories for a few days as that would relieve any inflammation, but she should be fine.

And, yes, Tessa is acting fine. We’re just shaking our heads. DRAMA! It sure was a dramatic episode!

Other than that, we can report that Southern California is, indeed, “super blooming.” The hillsides are covered in beautiful yellow mustard flowers, everywhere you look! We started seeing them as soon as we came out of the mountains into San Diego last week, and the yellow hills just keep on rolling. It really is stunning! 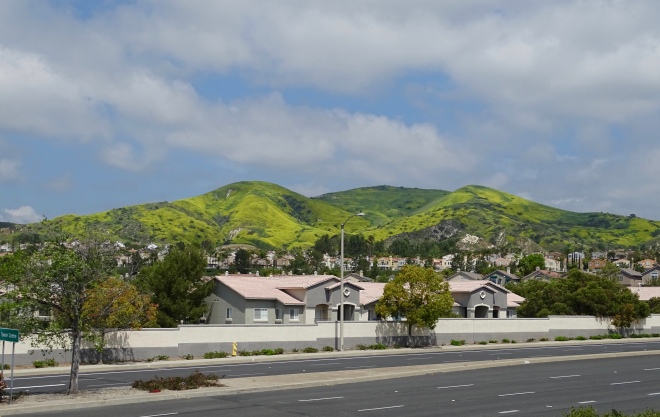 Today we turn the motorhome east and head to Palm Springs and Joshua Tree National Park. It’s the beginning of our trip home to Connecticut! The weather here has been wonderful, warm enough for shorts and t-shirts during the day, cooling off in the evening. We hope we can keep this weather as we head east. No more 45 degree days and 30 degree nights, please!